The Foundation believes in a free-market in which men must be allowed to pursue employment and economic gain.

END_OF_DOCUMENT_TOKEN_TO_BE_REPLACED

Corruption is any abuse of a position of trust in order to gain an undue advantage. This involves the conduct of both the person who abuses his position of trust as well as that of the person who seeks to gain an undue advantage by this abuse, and its success is dependent upon the ignorance or acquiescence of those who suffer as a result of that corruption.

Corruption can occur in relation to officials as well as between private persons. It is particularly prevalent in certain kinds of transactions (for example, when awarding public contracts), in certain economic sectors (for example, in extractive industries), and in certain countries.

Corrupt practices can range from small favours in anticipation of a future advantage, to the payment of large sums of money to senior members of governments. It has, because of this, long been argued by many that corruption is a political issue that will be solved by political action.

Were this in fact true, corruption would have been eradicated from the face of the earth many centuries ago, if not earlier. In human history there have been thousands of laws enacted by monarchs and parliaments to solve the issue of corruption. All, without exception, have failed.

There is no nation on this earth where corruption does not have a foothold in both government and everyday life.

Both the world as a whole, and Nigeria itself recognized that the country has a destructively powerful expression of corruption at every level of life. The results are felt by Nigerians everyday in the state or existence of our hospitals, schools, roads, colleges and universities, electricity supply and general standards of living.

There are laws and regulations in place to combat our corruption, but all have proved to be unsuccessful. They have done so because corruption is not a force that exists outside of a human being; it is something that resides in us, and we decide whether to express it or not.

The old adage applies that you cannot legislate good into the hearts of men, they must be convinced of it in their very beings.

We wholeheartedly agree with laws that attempt to both regulate and do away with corruption, but we also want all Nigerians to know that we consider it to be a problem for which each of us, as individuals, is responsible.

The solution to corruption lies within each individual making the right choices, having been equipped to make those choices.

We cannot be forced into right choices, but we can be educated to make those choices. Until and unless we educate and convince the many millions of Nigerians that corruption is wrong….it will remain something that prevents the country from developing in a way that benefits all Nigerians.

Only in this way will Nigerians cease to tolerate corrupt politics and leadership.

If  those in power claim to feel the “hand of God” on their shoulders, should we feel comforted, inspired or afraid?

END_OF_DOCUMENT_TOKEN_TO_BE_REPLACED

Chief Anthony Enahoro was one of Nigeria’s longest-serving political activists.

For seven decades he played a prominent role in the tumultuous politics of the country, campaigning first for independence from Britain, and later taking a courageous stand against some of Nigeria’s most brutal dictators.

END_OF_DOCUMENT_TOKEN_TO_BE_REPLACED 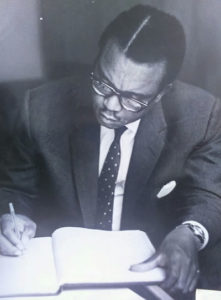 The movement for National Reformation

CELEBRATING THE LIFE AND TIMES OF A TRUE LEADER, ICON, HERO AND BELIEVER IN A GREAT AND PROSPEROUS NIGERIA

On the 15th December 2010, light dimmed on the political landscape of our dear country. In the early hours of that day, Chief Anthony Eromosele Enahoro – politician, journalist, thinker, mentor, a rare breed amongst political leaders and prodemocracy activist, bade us farewell and went home to be with his Maker.